New Book: Tear Down This Wall of Silence Now in Its Second Edition

I well remember the 1990s when the sexual abuse scandals among Catholic priests were being broadcast all over the news. But whenever they aired, I turned them off. I didn’t want to know about them because they were horrible. And besides, my pea brain told me, that was the Catholics, and of course horrible stuff like that is going to happen there, but it had nothing to do with me. It was very, very distant from my world. So I thought. (Even though I knew I had a close relative who had been sexually abused. And other girls in college had confided in me that they had been sexually abused. Those were all in a different compartment of my pea brain.)

Well, I’ve repented of that attitude, for sure. 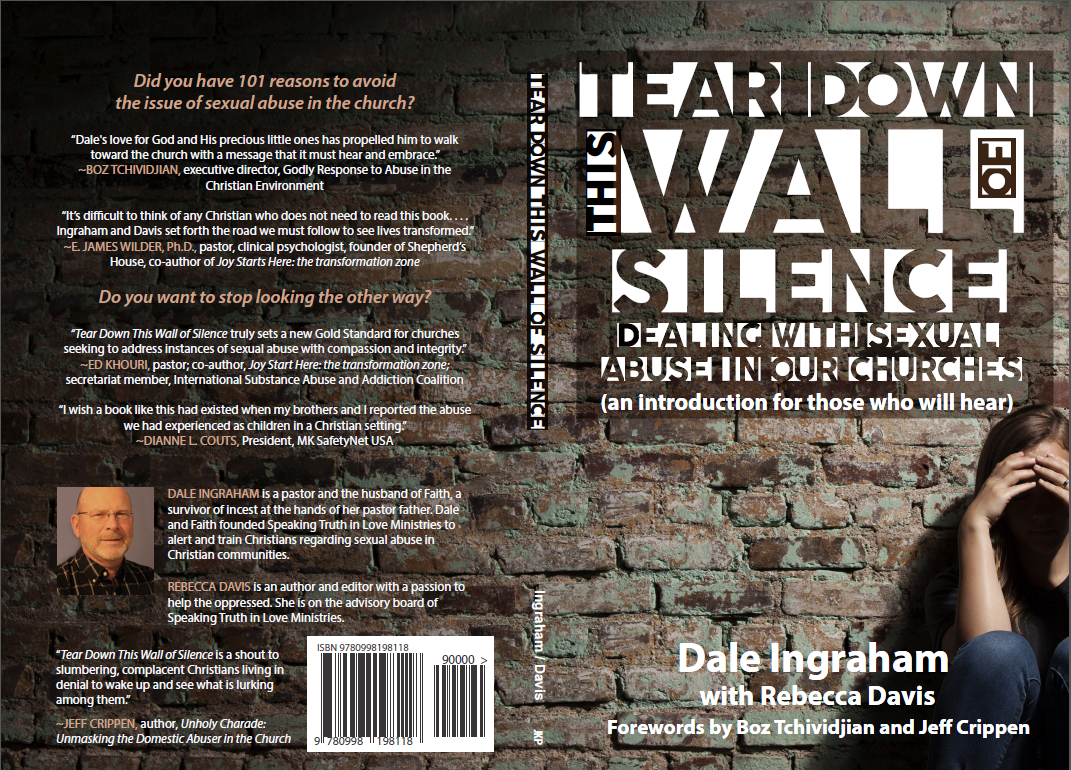 Click on the book cover to view a larger version to read the text on the back.

I’m so delighted to let everyone know that Tear Down This Wall of Silence  (which you can see on Amazon here) is now in its second edition (with Justice Keepers Publishing) and better than ever! Dale and Faith share a passion to help the oppressed that I’m privileged to be a part of.

What makes this book important? Well, like Unholy Charade, it isn’t written so much to the survivor of abuse (though one chapter is specifically to the survivor) as it is to the churches. Wake up and see what’s happening in your midst! Don’t wait until there’s a crisis—get educated now! Don’t figure there are no abuse survivors in your congregation—we’re telling you, at least 25% of your congregation is sexual abuse survivors! That is an absolutely staggering number.

In the world of domestic abuse, sexual abuse is all too common. As Dale and Faith tell their own story in memoir form throughout this book, you’ll see that Faith’s pastor father fit the profile of a domestic abuser—throwing temper tantrums in the home, threatening suicide, requiring that his wife work to support the family while he earned next to no income. When he began sexually abusing Faith at the age of nine, as a child in this home of chaos and terror she believed she had nowhere to turn.

And in the past five or so years, I’ve met so many others who fit this same description. Even if the sexual abuse came from outside the home, the abuse and/or neglect within the home left the victim feeling as if he or she had nowhere to turn.

Tear Down This Wall of Silence can be helpful for sexual abuse survivors, to help them understand the dynamics of the abuse and enabling—the enabling that is the rotten support for the evil practices. But even more it will be helpful to the friends and family of abuse survivors to help them understand the mindset of one who commits these heinous crimes, to see the dynamics of the enablers and avoid being one (which, in my ignorance, I was). It will be helpful to people within the church who want to understand and help others.

There are a few differences in the second edition, but the one I’m most excited about is the addition of information about Bill and Pamela Ronzheimer’s Marriage Reconstruction Ministries, which you can see at www.marriagereconstruction.com, because their heart is specifically to help husbands and wives whose marriages have been affected by the wife’s sexual abuse. I’ve gotten to hear them speak, and they’re awesome. (Bill is threatening to write a book, and I hope that will happen!)

Those of us who never experienced abuse, who grew up in safe and loving families and perhaps even have good marriages, we can ask the Lord to increase our capacity to receive and do the hard things He calls us to. Isn’t this how the New Testament tells us we are to live?

The ones needing that cup of cool water are right there at your door. Maybe they’re even right next to you in the chair or pew at church. Our churches desperately need more people who want to reach out to those who have been wounded.

Tear Down This Wall of Silence is an important step toward being the comers-alongside God has called us to be.

Some quotations from the book that I would love to eventually make into posters:

How easy it is to appear righteous when the church system stresses outward appearance and religious activities as the evidence of holiness!

For many outside our churches, rather than seeing a beacon of light drawing them to Christ, they see only the hypocrisy eclipsing the light.

When the leader decides to cover abuse, any value his ministry may have had has been lost, and the ministry will become a hollow shell.

It is vital for abuse survivors to have the opportunity to share what they’ve been through with someone they can trust, because after such horrific trauma they need validation that they really do matter, and they need to know that someone cares enough to listen.

Enablers may have many reasons for protecting offenders, but none of them are about genuine love.

How can dealing with abuse and holding offenders accountable for their sins possibly hurt the name of Christ?

God’s will is that these works of darkness need to be exposed. It is the light of truth that exposes the evil. This is one of the very best ways possible to help the cause of Christ.

Protecting the offender while silencing the victim is actually injustice under the guise of mercy.

The truth is that justice must also stand alongside mercy or else you will have neither.

The best way to show grace to an offender is to call him to truth and righteousness, humility and repentance, by which, through the power of God, his life can be truly transformed.

Why would any Christian tell people who are trying to stop sexual abuse that they are being unloving? Are some Christians so blind to the most basic truths of Scripture?

Instead of viewing lament as a lack of faith, we would do well to view it as part of the process of faith.

Repentance is not simply shedding tears and saying a few words. It is a complete change of heart and behavior, going in a different direction, knowing that the old direction was wrong.

When God sees you, He doesn’t just see what has happened to you, but He sees you for who you are as a person, and He knows the plans that He has for you.

But the truth is the Shepherd of your soul is not ashamed of your wounds and scars. He loves every one of them. God loves to make beauty out of ashes, glory out of mourning, and wholeness out of brokenness, no matter what you have experienced.

I’m excited to see how God will use this book for the furtherance of His kingdom, to call Christians to ministry and to show people His love, His mercy, and His faithfulness.

Sounds like a fantastic book. I am going to have to spend some more money! Thanks for the tip.