Behind the Broken Wall, Beyond the Torn Curtain

Back in the old days, before I entered the controversy, my blog was a devotional blog. This is one I posted on our son and daughter-in-law’s wedding day, and it’s my joy to repost it now for their sixth anniversary. 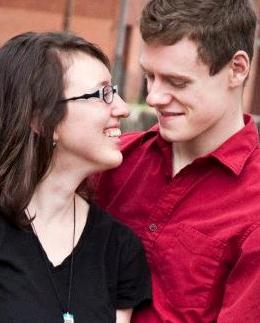 At the end of November, 1989, we welcomed Stephen Davis into the world.

At the very same time, the Berlin wall was coming down. I remember watching it on television—me, the young mother who had been suffering with debilitating morning sickness, exhausted by my pregnancy, trying to keep up with an energetic two-and-a-half year old—watching the jubilant crowds chipping away pieces of that notorious wall, and asking my husband, “What in the world is happening?”

What in the world.

Our lives moved ahead, so we thought, more or less as they would have if that Wall, that Curtain, had never come down. Hers, on the other hand, was clearly and radically changed.

Maya left Belarus to go to school in Lithuania, where she met Jesus Christ and became a child of God. From there, she went to a Christian college in the United States.

When she came to South Carolina as a translator for some Belarussian children, she met the young man who had been born when the Berlin Wall came down.

Today they will be married. Hearts and hands are joined, across the broken wall, beyond the torn curtain.

Oh, did you think this was about another broken wall? Maybe the one of Ephesians 2?

Jesus Christ “is our peace, who has made both [Jew and Gentile] one, and has broken down the middle wall of partition between us.”

Or did you think it was about another torn curtain? Maybe the one of Luke 23 and Hebrews 10?

“And the curtain of the temple was torn in two” and Jesus made “a new and living way opened to us through the curtain, that is His body.”

But look! It’s the same God who does it all. He is the Breaker of walls of separation. He is the Tearer of dividing curtains.

We stand in awe of His mighty work, in both physical and spiritual realms.

All over the world.

Beautiful. Thanks for sharing.

This gave me goose bumps, Rebecca. I too remember watching the wall come down, what a fantastic day of celebration it was. How wonderful that your family’s story is connected to that event in such a happy way.