A friend listened to the song “If You Want Me To” by the blind songwriter Ginny Owens. She said, “I can’t say this is where I am all the time, but it’s where I want to be. I know it’s all true.”

This friend was about to have surgery and didn’t know if she might come out a paraplegic.

Me? I have no impending tragedy hanging over my head. Rather, my daughter, who got married a year and an half ago, just became the mother of a precious little boy. 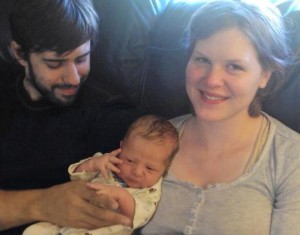 And me? I’m a new grandmother. 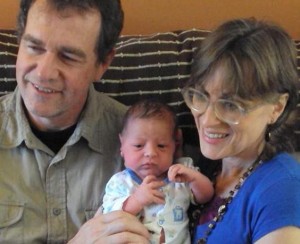 I’m blessed over and over, with many blessings, countless reasons to be flowing out with joy.

But something happened in those happy first few days. I began to react to the lack of sleep, the emotions, the inability to get to all the things I thought I ought to be accomplishing, the small slights and disappointments. I began to get . . . well, discouraged.

Stupid, stupid, I told myself. But it didn’t help.

Let’s see. I complained that I had no hands until I met a man who had no feet. Is that how that goes? Something like that, anyway.

It was pretty short-lived, that stupid time of reacting to circumstances, to hormones, to lack of sleep. But as I worked through it with the Lord, it reminded me of a few truths that have at various times in my life stood out in bold relief.

Even when I feel like I’m slogging in slow motion . . .

. . . I know that Jesus Christ is the Solid Rock underneath.

I won’t feel guilty for not feeling the joy I’ve been writing about (although, I have to admit, that was a temptation). Because I know that when I go through trials—the great ones, or the small ones that niggle like cankerworms—the joy will still be there, on the other side. Because my Savior doesn’t change.

What kind of joy did Jesus know in the Garden of Gethsemane when He was praying with great bloody drops of sweat?

But Hebrews 12 tells me that for the joy that was set before Him, He endured the cross, despising the shame.

Jesus knew that joy waited for Him on the other side. He had every confidence of that, even in His grief. He knew that, eventually, He would experience the joy.

And whether I’m walking alongside a precious new mother or walking in the valley of the shadow of death, even in the darkness, I can know with confidence that it’s all true.

Jesus Christ is my joy. Sometimes I taste it, like honey on my tongue. Sometimes I have to just trust and wait for Him to reveal Himself to me again.

But I always know it’s true.