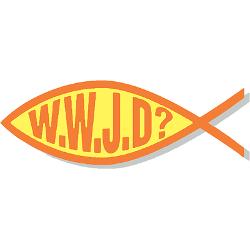 Maybe you remember the What Would Jesus Do phenomenon in the 1990s. The Christian culture of the U.S. was abuzz with the question in youth groups and Bible studies because an awful lot of people sincerely wanted to use it to help them live a more consistent Christian life. Maybe the bracelets and coffee mugs and shirts and aprons and bibs (yes, bibs) would help.

I had actually already read In His Steps several years before that phenom occurred, and wasn’t quite as taken with the book as some apparently were. Charles Sheldon, the author, seemed to embrace a kind of Good Old American Bootstrap Christianity, which generally speaking seemed to say, “Jesus put your boots on your feet for you, and now, by jiminy, it’s up to you to pull on those old straps and get tromping through the Christian life.” (Except I wasn’t absolutely sure if he really believed Jesus was the one who had put the boots on my feet, but that’s outside the scope of this text.) This question—WWJD—was going to be the solution to the problem of the opulent U.S. Christian lifestyle and the need to become living sacrifices.

Granted, the opulent, distracted lifestyle of U.S. Christianity is a problem. A huge problem. But I never found that “What Would Jesus Do” really helped me. For example, would Jesus pick up a cup of coffee at the local coffee shop? Hmmm. . . .

For one thing, Jesus was God. That shone such a different light on His decision-making process that I often found it difficult or impossible to put Him in the position of us sin-drawn creatures. Would Jesus walk the streets of Bangkok to take the gospel to sixteen-year-old prostitutes? Well, maybe He would. But I wouldn’t necessarily advise my husband and sons to do the same.

For another thing, Jesus lived a very brief life, with a laser-focused purpose. What would Jesus do with the pile of dishes after he and his twelve disciples were finished eating? Well, there’s a possibility He might go on His way to preach and teach and pray, leaving His disciple Martha to clean them up—very joyfully, I would imagine, rejoicing that her Savior is the Resurrection and the Life. And probably after Jesus was gone, Mary and Lazarus would even help.

The reason I’m thinking about WWJD yet again (having been only a quizzical observer during the mid-90s cultural obsession) is that I’m reading Philippians. Paul says that his burning desire is to know Christ and to make Him known. This thought has been rolling around in my heart for a couple of weeks. It has produced three questions by which I’m seeking to evaluate my possessions and my activities.

Will this help me to know Christ? I call this the Vertical Outpouring—from God to me. Would Jesus spend time reading the Word of God? Maybe, but since He was the Word of God, and the Word of God flowed out of Him, He sure didn’t need to read it the way I need to read it. My focus on Him is always in danger of being clouded by the multitude of distractions, urges, and impulses in my life. I desperately need the washing of the water by the Word that He alone can give.

Will this help me to make Him known? I call this the Horizontal Outpouring—from God to others, through me. Would Jesus watch an essentially meaningless, harmlessly funny movie? I think I can be pretty sure He wouldn’t. His ministry time on this earth was very short, and He had a crucial work to accomplish. But I’m raising children, and sometimes a movie—I have to remind myself—is a way of tying cords of love so that they’ll want to listen to me when I speak to them about Christ. Would Jesus write missionary books for children or tell stories in schools? No, because that wasn’t what the Father had called Him to do. But this is the way that is my delight to make Christ known.

Will this turn my heart to prayer?  I call this the Vertical Outpouring—from me to God. Would Jesus spend time gathering information about the desperate needs of the unreached nations or the desperate wickedness of the U.S. government-corporation collusion?  Well, no, because He already knows these things. But for me, these things are important to understand and know the truth, and to fervently pray with my eyes open.

Would picking up a cup of coffee at the local coffee shop fulfull one of these goals? And suddenly the answer is clear. If I’m going because I’ve gotten addicted but it’s just coffee so it’s not that big a deal and besides it’s only $2.50 when Starbucks is $4.00 . . . then, well, maybe not. If I’m going there there to visit with a friend and talk with her about Jesus, then let’s do it.

I don’t remember to ask these questions about everything all the time. Even at my advanced age, there’s so much I’m still learning. But when the Lord turns my heart to these thoughts, as He turns my heart to Him, my heart grows stronger, and life becomes simpler.

Absolutely beautiful and SO true – I have often thought “But, I’m NOT Jesus!” We are being conformed to His image – ie, His character, His dependence upon the Lord. But we are different with different needs and callins than our Saviour. And that’s okay! Thanks so much for these insights, Rebecca. I sent this one to my mom and she really loved it, too.

From a friend: “This was very insightful — a welcome perspective on the highly acclaimed In His Steps. For all the author’s good intentions, that book cemented my already perfectionist nature when I read it as a girl of about thirteen years. That is to say, I became very nearly paranoid in my actions, bound by the fear of judging Christ’s preferred action wrongly in a situation and thereby failing at the Christian life. I remember the bracelets, the necklaces, and even the written reminders to myself of the miracle slogan. Then came the true miracle one day — running across Philippians 3:8-11 during devotions and being utterly captivated by the cry of Paul’s heart ‘to know Him.’ This changed the tune of my prayers and ambitions from moral-centered (Sheldon) to Gospel-centered (Paul). This is not to say I never fall back to Sheldon’s thinking but that I now realize it’s futile and, by God’s grace, am able to catch myself in the act. Praise God for the Spirit’s empowerment for daily living in Christ, not merely in mock imitation of Him! …I was so grateful for the way you presented your thoughts on Sheldon’s book by weaving Paul’s heart into the picture.”