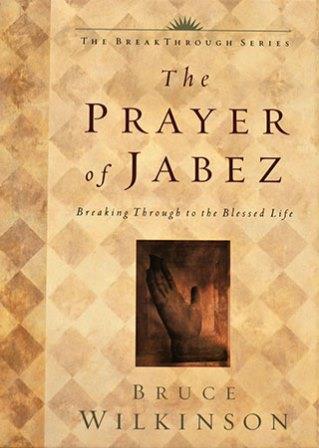 When a theme is trendy, I tend to avoid it. For good or ill, my gut reaction is if everybody’s doing it, to back off. Shucks, I might not have even followed Jesus when He was on earth, because of all those crowds.

That’s why it took me about eight years to read The Prayer of Jabez by Bruce Wilkinson. When it first came out and was all the buzz, I scorned it and turned up my nose. Then, in 2009, when I saw it on the rack at a dollar store, I shrugged and picked it up. It wasn’t trendy any more, and besides, it was my price.

I’m not sure who in 2013 is still talking about The Prayer of Jabez. I doubt very many. But a couple of weeks ago I went back and read my journal from 2009. (I try to read old journals at the end of every year, just to be reminded of what God is doing in my life.) I was reminded of how—just at that point in my life—the Lord used The Prayer of Jabez to pack me a powerful punch. A life-changing punch. At that time I began to pray (albeit sporadically, because I’m often not very consistent in my prayers) for the Lord to “enlarge my borders.” At the beginning of this year I began to pray it with renewed earnest, at first with some angst because I wasn’t sure how much more I could take on. But I’ve been reminding myself that that’s a fleshly way to think—He’s the Empowerer for all the good works He gives us to do.

And as usual, God has brought my Bible study into stark juxtaposition with the events of my life . . . because I’m in II Corinthians, and Paul had a lot to say about borders. He was pretty disgusted that some Judaizing upstarts were coming in and claiming that his own work among the Corinthians was their work. But he emphasized that—with all he was doing—he wanted his borders extended even more, to more places, to take the Good News of salvation in Jesus Christ to more and more areas where it had never reached. One of the ways this prayer was accomplished happened when he was taken to a prison in Rome, from where he continued to preach—and write letters that we still read—until he was beheaded. His borders, his frontiers, were enlarged, while those of the Judaizers, who spent much of their time comparing themselves with each other, have been forgotten.

Paul’s passion was to take the Good News where it had never been heard. My passion is to proclaim the mighty Works of the Lord that He’s still doing today, and to—without fear—offer Hope in Jesus Christ to those who feel as if they’re without hope.

I pray that all of us will have enlarged borders—new territory—in 2013 for proclaiming the love and faithfulness and glory of our great God.

Thanks Mrs. Davis! I was skeptical originally about the prayer of Jabez as well but I think it’s powerful when used sincerely and properly. It helps one to redirect his intentions/motives while I still expressing the desire to grow and see success through God’s strength. I still pray the prayer of Jabez from time to time. Thank you for these interesting and edifying posts.

Yes, you said it well–redirecting desires and motives while still desiring to grow and see the right kind of success! Praise God, and I pray for that kind of blessing for you this year, Josiah.