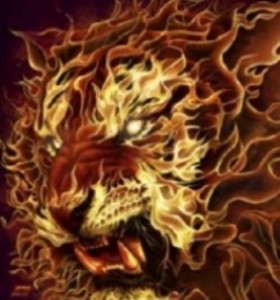 It’s Passion Week, and I’ve been thinking about lions.

In Philippians 2 I was reading about how our Lord Jesus humbled Himself to the death of the cross, so God highly exalted Him.

That made me think about I Peter 5:6-9. It says, “Humble yourselves, therefore under the mighty hand of God, that He may exalt you in due time . . .”

Of course this passage applies to us, but this time I thought about how that “you” is true of Jesus as well. He humbled Himself. He was exalted. So I read the whole passage in I Peter as if it were about Jesus.

“ . . . casting all your care upon him; for he careth for you.”  Didn’t He always cast all His care on His Father?

“Be sober, be vigilant, because your adversary, the devil, like a roaring lion walketh about, seeking whom he may devour; . . .” Didn’t He stand sober and vigilant against His adversary? Didn’t He resist that adversary steadfast in the faith? And what about that lion?

I looked up some old notes of mine from I Peter 5:6-9. I had written, “I went through the time of the roaring lion trying to devour my soul.” And again, another time, “I have been in the presence of the roaring lion for an extended period, more than ever before in my life. It emphasized to me the importance of that sobriety and watchfulness of spirit in this passage.”

And throughout the life of Jesus, and especially as Jesus went to the cross, the lion roared. Roared to split the earth in two.

“ . . . knowing that the same afflictions are accomplished in your brethren that are in the world.”  Certainly Jesus knew that his brothers all over the world would also be facing off with the enemy, in His strength. They would also face persecution. They would die for His sake.

Then, thinking about that made me think about Psalm 22, the perfect psalm for Passion Week, where Jesus talks about “declaring your name to my brothers, praising You in the midst of the great congregation.” That psalm begins with one word from the cross, ends with another word from the cross, and in between describes everything that was going in Jesus’ heart . . . in between.

And look—there was that roaring lion again. Not once, but twice.

“Save me from the lion’s mouth.”

But through the very thing that he thought had gained him the victory-—the bloody death of Christ—he was trounced.  And then the triumphant resurrection of Christ, which delivered the death blow to that lion.

In the suffering of Christians, that lion roars. Always looking for some victory, trying to devour some believer—even in his death throes. But ultimately he will be forever defeated, in the very thing in which he thinks to gain the victory, as suffering believers resist him steadfast in the faith. Even in the middle of that suffering, the work of God is accomplished.

So we remember that ultimately—Passion Week and always—the lion roars in vain.  Never forget that, even when the battle is fierce. In Christ, we are completely victorious, because that lion has already been defeated.