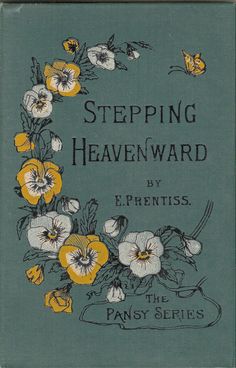 When I was sixteen, my mother put an ancient plain-covered hardback book in my hands, wanting me to read it. It had the most boring title ever, Stepping Heavenward. This was her book when she was young, she said.

I groaned inwardly. Did I mention that it was ancient? And how could a book possibly have a more boring title? I assumed it was an ancient devotional book, and devotional books and I had never gotten along.

It wasn’t. It was a fictional journal. Even though it had been written in 1869, I was captured by the first line.

“How dreadfully old I am getting! Sixteen!”

I remember how troubled I was, as I read, that the main character, Katy, spent time agonizing over whether or not she was truly saved. Why doesn’t she just pray the sinner’s prayer and be done with it? I wondered. Seriously, I did.

But except for that, I loved the book. I cried. I saw a life being transformed. I cried some more. And it seems that at some point toward the end, I was on my knees.

In 1984, when I was engaged to the man I would marry, I read the book again. This time I remember very clearly that by the end of the book I was on my knees, sobbing. I wanted to have the life transformed by the power of Christ that I saw in Katy.

Again I read the book, the third time, when my second child was a baby. Again, I am not kidding, it had me on my knees by the end. And this time, the grappling of soul over assurance of salvation made sense to me. I had learned something since I was sixteen.

When I worked at Bob Jones University Press in the early 1980s I tried to get them to publish it, since it had long been out of print. They decided it was too old-fashioned, but I’m happy to say that someone else didn’t. Stepping Heavenward has found new life, new covers, and several new generations of readers. I’m so thankful. I praise God for the life of Elizabeth Prentiss (aka Katy Mortimer), who also wrote this song. As I write missionary books and speak out for the oppressed, it’s the cry of my heart for this song to be true around the world:

This all my earnest plea,

I have to admit, I read some of it and missed the appeal. It seemed like Katy was constantly being careless or just questioning and her mother was forever the perfect beacon of calm and patience.

Katy was a careless and questioning teenager, for sure. That was much of the appeal to me as a sixteen-year-old. But seeing her struggles and growth in faith in the Lord throughout the book, especially after being jilted by a jerk and then marrying a good man who disappointed her in some ways (I could relate to that in my thirties), it resonated in a deep way with me, and looking at her life as she grew older became an example to me.