Back when Tim and I were dating, in the long-ago days when rock music had a electronic disco sound but I didn’t know that because I never even listened to Michael Jackson, we played a lot of table games together.

“How quaint,” you say. Yeah, well. Tim was a pretty incredible game inventor. He made up a hilarious one he called “Road Rage” in which everybody is trying to get to the one parking spot, and another one later called “Treasure Island” that’s a combination of luck, strategy, and memory game with several ways to win, which is still a favorite of family and friends when they come to visit. . . .

At some point in those dating days I got the bright idea that together we should play the Ungame. Now, if you’re from our generation, you might have heard of this super-cool Christian icebreaker game. 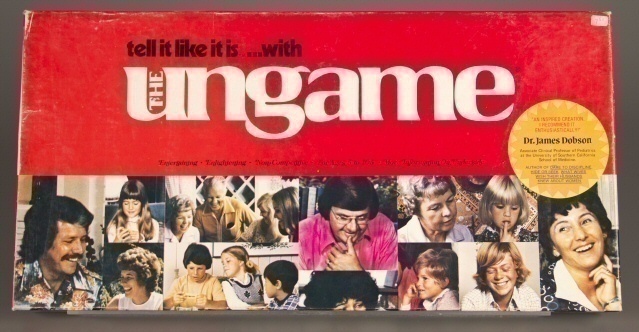 The board part of it was dumb, so we put that aside and just used the cards, which were basically a set of questions designed to help you get to know each other. Perfect for dating, I thought.

Now, 34 years later, I remember only one of the questions, but that one is burned into my memory. I picked up a card and asked him,

What quality do you admire most in a person?

My memory is that Tim didn’t even hesitate in his response. In fact, he leaned toward me, into my personal space, even, and enunciated one word extremely clearly.

I pulled away, a bit taken aback.

Ok, I thought. I’m going to try really hard to be reasonable.

He went on then to explain how much he was bothered by unreasonableness, but I don’t exactly remember that part. I remember my initial response, and then my follow-up thoughts, the thoughts I was thinking while he was explaining himself.

To be quite honest, I was a bit disgruntled.

Maybe he wasn’t the God-pursuing man I was looking for.

Well, about 34 years have flowed under that bridge, and here we are. I’ve never forgotten Tim’s emphasis on reasonableness, and I’m so thankful for it. While wolves in sheep’s clothing have told their targets they valued “godliness,” my husband has never wavered from being Mr. Reasonable. As we’ve worked through some tough stuff together and gone through difficult times together, he has always been a man of wisdom and insight and always, always reasonable. Even though we both believe in appropriate Biblical submission, Tim made a discerning observation about marriage that distilled into my own brain as something like, “Having a good marriage is less about one spouse ‘yielding’ to the other than it is about both spouses simply being reasonable.”

In getting to know him, of course, I found that Tim did love the Lord and followed Him (and as a side note, never tried to take advantage of me, which at the time I was too naive to appreciate). Even as a young man he had insights into both the Word of God and people that were immensely helpful to me, he became a respected Bible teacher when he was in his mid 30s, he eventually followed a call into the ministry, and he was asked to leave the church for being a near-heretic.

Happy anniversary, Mr. Reasonable. I’m so thankful for you, and I love you.

Exactly! That is the core truth here. Thank you!

Happy Anniversary!! What a beautiful story! You guys are an inspiration.

This is beautiful – as is Tim’s heart.

For example, moms who willingly sacrifice their own interests for husbands and kids are commendable. But there comes a point when some wives/mothers become martyrs–and vocal ones. This can really aggravate other members who beg the Martyr Mommy to stop “sacrificing.” They’d rather have dust on the furniture than have her groaning about how she will SLAVE to have a clean house even if NO ONE else appreciates her SACRIFICE. (Sniff.) Martyr Mommy will deliberately neglect her health sometimes and glory in how sick she is while slaving to serve her ungrateful family. Ugh.

Martyr Mom needs help, but I see this more as a completely bad thing masquerading as a good thing rather than a good thing gone to extremes.

I think there’s a sizeable proportion of ungodly behaviors that are perhaps more clearly evil from the beginning and at the core, more obviously not “good things taken to extremes.” For example, just pulling from a few stories I know about, molesting and raping children (and adults); selling children (and adults) into sex slavery; purchasing and viewing degrading pornography produced by these sex traffickers; terrifying, traumatizing, and abusing children (and adults) within an inch of their lives; pretending to be the good, wise, and helpful man of God or Titus 2 woman while doing such things. These and many other behaviors are utterly noxious to the nostrils of God, and I pray more people in His church will catch a whiff of the stench and a glimpse of the destruction around them.