“No matter what you’re suffering, your greatest problem is your own sin.”

The ones I have known meant it this way:

I never heard it said in reference to any specific, unconfessed, unrepentant sin in evidence in the life of a sufferer, and there was no connection made between our personal sin and our present suffering.

It was simply thought to be the correct Christian context for suffering, to remember that our greatest amount of weeping and mourning should be over our own personal sin, that any present suffering should always be dwarfed by the ongoing insurmountable problem of personal sin.

Now I saw in my dream, that the highway up which CHRISTIAN was to go was fenced on either side with a wall; and that wall was called “Salvation.”

“In that day shall this song be sung in the land of Judah; we have a strong city; salvation will God appoint for walls and bulwarks.” ~Isaiah 26:1

Up this way, therefore, did burdened CHRISTIAN run; but not without great difficulty, because of the load on his back.

He ran thus till he came at a place somewhat ascending; and upon that place stood a Cross, and a little below, in the bottom, a sepulcher.

So I saw in my dream, that just as CHRISTIAN came up to the cross, his burden loosed from off his shoulders, and fell from off his back, and began to tumble; and so continued to do till it came to the mouth of the sepulcher, where it fell in, and I saw it no more. 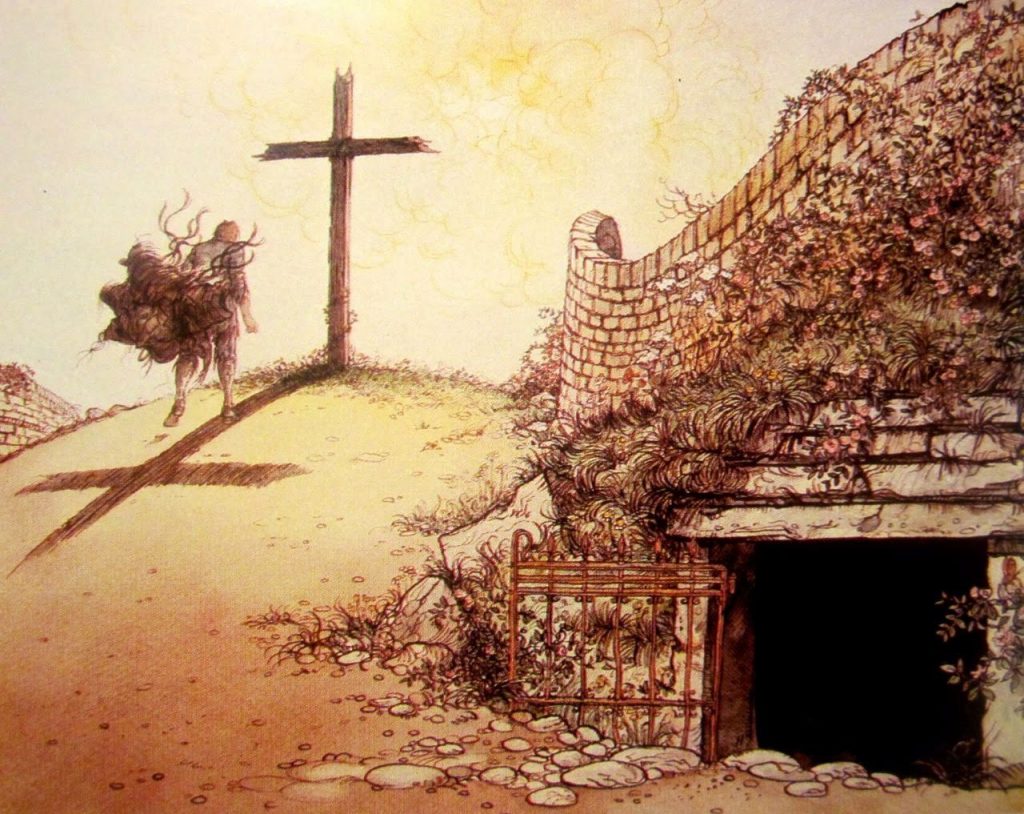 by Alan Perry, from “Dangerous Journey”

Then was CHRISTIAN glad and lightsome, and said, with a merry heart,

“He hath given me rest by his sorrow,
And life by his death.”

Then he stood still awhile to look and wonder; for it was very surprising to him, that the sight of the cross should thus ease him of his burden. He looked therefore, and looked again, even till the springs that were in his head sent the waters down his cheeks.

Now, as he stood looking and weeping, behold three shining ones came to him, and saluted him with, “Peace be to thee!” so the first said to him, “Thy sins be forgiven thee.”

“When Jesus saw their faith, he said unto the sick of the palsy, Son, thy sins be forgiven thee.” ~Mark 2:5

The second stripped him of his rags, and clothed him with change of raiment.

““And he answered and spake unto those that stood before him, saying, Take away the filthy garments from him. And unto him he said, Behold, I have caused thine iniquity to pass from thee, and I will clothe thee with change of raiment.” ~Zechariah 3:4

The third also set a mark in his forehead, and gave him a roll with a seal upon it,

“In whom ye also trusted, after that ye heard the word of truth, the gospel of your salvation: in whom also after that ye believed, ye were sealed with that holy Spirit of promise.” ~Ephesians 1:13

which he bade him look on as he ran, and that he should give it in at the Celestial Gate: so they went their way. Then CHRISTIAN gave three leaps for joy, and went on singing:

“Thus far did I come laden with my sin,
Nor could aught ease the grief that I was in,
Till I came hither. What a place is this!
Must here be the beginning of my bliss!
Must here the burden fall from off my back!
Must here the strings that bound it to me crack!
Blest cross! blest sepulcher! blest rather be
The Man that there was put to shame for me!”

In contrast to Bunyan’s story, in the religious Pharisees’ view, Christian would have had no business watching his burden fall into a sepulcher and leaving it there.

Rather, Christian ought to have fished it out and carried it away, so that he could always compare everything bad that ever happened to him in the future to the ongoing pain of constantly lugging that awful load of guilt and shame everywhere he went.

This idea offers no comfort (and I think it’s intended more to minimize suffering than to actually comfort), but the Bible comforts us.

The Bible doesn’t compare our present suffering to our ongoing struggle with sin.

Rather, the Bible compares our present suffering to our future glory (2 Corinthians 4:17).

The Bible calls us to LOOK UP from present trouble, to consider our union with Christ, our everlasting life, and our eternal joy together with God and all his people, forever.

And this is necessarily a different way of looking at our personal sin.

The true Gospel comforts repentant sinners, reminding us that Christ was charged and has already been punished in our place, and it warns unrepentant sinners that the wrath of God is severe and imminent.

As true Christians, we do properly hate and abhor our sin, but we also rejoice that our sins are taken away. We are called to enjoy this present union with Christ and this incredible gift of everlasting peace with God.

We were brought to His Cross as slaves to sin, and we have come away as slaves to God, with every proper liberty ours in Christ.

The Gospel is Good News, and it everywhere speaks comfort to the Christian on this very point.

We cannot be “grace-based” without understanding this truth.

Great truths, Rebecca. Today’s sin-waggers, who always wag the individual’s sin in front of his face, have no more understanding of grace and salvation than did the sin-wagging Pharisees of old. Both find their usefulness only in reminding men of their awful sin, and how much they need someone to relieve them from their terrible burden.

God was deeply displeased that his people were being so oppressed, and sent his son to free men from both the power and the guilt burden of sin. Those who proclaim their worm theology and wave sin in the faces of hurting men and women are not doing the work of God. We might imagine that spiritual abuse is something new, but it was also commonly practiced by the false teachers in Jesus’ day.

Bunyan got this right; the point of the cross was to free us from this burden, to remove the chains of sin from our minds and the weight of guilt from our hearts. One of my favorite hymn verses of all time says it so well:

If Jesus says ‘Thy sins are forgiven thee’ – and he does – then who will dare to accuse you and place the burden Jesus so lovingly, sacrificially removed once again upon your back?

Do not let your accusers burden you, child of God. Your sin has been forgiven, your burden removed and you are free to live and love as God patiently teaches you.

Romans 8:1 Therefore, there is now no condemnation for those who are in Christ …

My former YRR pastor had this to say: “They cross is not about your value, it’s about your sin!” … same twisted theology!

Oh my goodness, yes. Of course the cross was about your sin. But it was also about your value to God–He died for you because HE LOVES YOU. And I’ve said to people, “People are intrinsically valuable. That’s why we believe unborn babies have value.” It seems so obvious to me. . . . that is, it does now. I can remember a time when I believed we were all worthless worms.

Rebecca, I have always interpreted the Bible (and my own conversion at 17 confirmed it) to say just what you have so beautifully expressed! I grew up with an emotionally abusive father and found my Heavenly Father to be the antithesis of my earthly one.

That’s why theology that paints God as a narcissist – concerned only for his own glory… is SO VERY disturbing to me! NO! God is not an abusive father!

The Gospels couldn’t be more clear: over and over again we read that Jesus VALUED the outcasts, dined with them, hung out with them; he was a friend of sinners; he identified with the vulnerable and weak; he longed to gather those who rejected him; left the 99 to search for the one; forgave the thief, and asked God to forgive the ones who nailed him to a tree! In light of all this, for the life of me, I can’t understand why anyone would want to paint God as a stern, distant, tyrant who sends the masses to Hell to burn forever for the sins he predestined them to commit so that he can be glorified! WHY would anyone want to believe that when the Bible doesn’t support it?

I do want to point out that this beautiful blog post is compliments of my friend, Valerie Jacobsen, rather than me.

Thank you for this wonderful article. I’m sharing this with others… very relevant!

Thanks for this post. It’s so true. I spent so many years in church beating myself for sins and struggles that weren’t really my fault. And then missing the things that actually were sinful, and within my power to change. It was this over emphasis on sin and on my personal sin. I finally found people who could treat my wounds with compassion, and help me heal.

I’m so thankful to hear that, Lila. God bless you.

I think that, when we apply the concept of “original sin” and “the depravity of man” to someone who already struggles with such a deep sense of pervasive badness, it can be more harmful than helpful. Something that I realized, too.