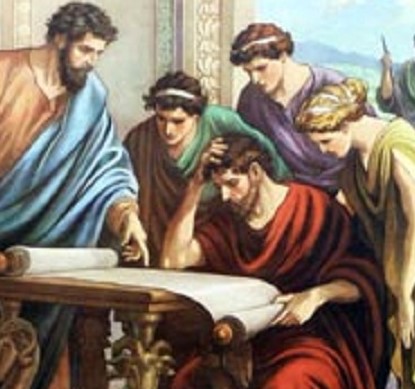 I’ve heard sermons extolling the Bereans for searching the Scriptures, but it’s a rare preacher indeed who will urge his listeners to themselves search the Scriptures to see if what he is teaching them is true.

When I’ve heard it, it’s often been about fact-checking him on details.

But when Acts 17:11 describes the Bereans searching the Scriptures, it wasn’t about fact-checking Paul. It wasn’t about looking at just one or two proof texts.

Now that takes some serious study. It’s the kind of study a lot of Christians aren’t interested in undertaking–and for many, it doesn’t even cross their minds to do it, because they simply assume they’re being told what they need to know.

But there’s another thing that makes the Bereans’ research and study stand out.

The motivation of the Bereans wasn’t to prove Paul wrong (which is what mine often is with modern preachers when I seek to untwist Scriptures that have been used to abuse).

Actually, they wanted to prove him right.

You see, Paul hadn’t given them bad news that when they came to Jesus they would be considered hopeless scum who were destined to slog through sin for the rest of their lives, with an angry God ready to pounce on them when they displeased Him.

Paul hadn’t delivered bad news that indicated they they had better get cracking but they would never be able to do enough, that aside from God’s forgiveness the Christian life was frankly pretty hopeless because they would all always be hypocrites, Pharisees, and worms.

It was good news they were hearing from Paul, very good news. And they wanted to make sure this good news matched with reality.

It was more like, “Could news this good really be true? If it is, how is it we didn’t see it before?”

As they studied, they found that yes, this good news is true. And what good news it is!

Some of us are continuing to bring it. It’s the reason I started this blog and named it what I did. (No, in those days I wasn’t aware of the extent to which Scriptures needed to be untwisted from cultic teachers.)

This good news comes from the teachings and accomplishments of our Lord Jesus Christ, as well as teachings throughout the New Testament, with Old Testament writers corroborating. It is this:

All your sufficiency for all your salvation is found in Jesus Christ, not just for your justification, but for your sanctification as well.

The delight of God in you, His child, is not to be found in your hoop-jumping or your treadmill-running or your slavish submission to earthly authorities.

It is to be found in Jesus Christ alone, through faith.

That’s good news, but is it too good to be true? Search the Scriptures and see. Search them with eagerness, because it’s really, really good news. And it’s really there, just waiting for you.

Run to Him with all of yourself, and find in Him not a harsh Judge but a welcoming Father, eager to transform you from a beggar and slave laborer to a full-fledged son or daughter of the Kingdom.

Then when you are compelled in service to Him, as Paul was (1 Corinthians 9:15-18), you’ll know you’re being compelled by love, love for God and love for others.

If you then call yourself a “servant” or “slave,” as Paul did, it will be in this sense, a slave of love.

The engine inside you won’t be one of guilt and duty and “never enough,” but will be one of Spirit-empowered joy and love, of “always sufficient,” naturally arising in energy to do the will of your Father.

There will be no “Missions is one beggar telling another beggar where to get bread,” because we who come to God by faith alone in Jesus Christ alone are no longer beggars.

We have a feast laid out before us, and it is all ours.

This feast of the Father’s love, found in Jesus Christ, is all ours.

This is the good news that Paul preached, that the Bereans found when they searched the Scriptures. As Acts 17:11 (Amplified) says,

The Jews of Berea were better disposed and more noble than those in Thessalonica, for they were entirely ready and accepted and welcomed the message [concerning the attainment through Christ of eternal salvation in the kingdom of God] with inclination of mind and eagerness, searching and examining the Scriptures daily to see if these things were so.

It’s there. If you’ve been wounded by cult leaders, one of the best things you can do is find out who Jesus really is.

One of the best ways to do that is to read the gospels, over and over. Ask the Holy Spirit to remove from your mind anything “implanted” by the false teacher, and to plant His own truth instead. Ask the Lord Jesus to reveal Himself to your own heart through His Scriptures.

The Jesus you come to know this way, this Berean way? He might just even seem too good to be true. But that’s the real one.

That’s why it’s called “the gospel.”

For more about this wonderful gospel, I recommend this blog, of course. But I also recommend the book The Rest of the Gospel: When the Partial Gospel Has Worn You Out by Dan Stone and David Gregory.

Really appreciated this – searching the Scriptures for the good news that’s almost too good to be true. I think this is one reason why “The Chosen” series is blessing so many: we’re all getting a glimpse of who Jesus really is. Now, off to soak in the Gospel of Luke…..

Rebecca, Oh….. YES!!!
The Good News you speak of is the Good News I found 50 years ago, when I was a teen! The Good News that infused life with joy and meaning and hope! It’s not been easy to hang onto the True Gospel with all of the lies and half-truths that mascarade as Christianity! My best, Jane

I love it, Jane! When you got out of the cult-like mentality, you had the TRUTH to go back to.

I am grateful to my religious parents for encouraging us to do this- search the scriptures like the Bereans. Like you though, in over 50 years of attending Church, I haven’t heard a Paster say it. Interesting. Sad.

So glad your parents encouraged you to do this! That goes a long way.

“…hopeless scum who were destined to slog through sin for the rest of their lives.” Yep, that’s pretty much the Gospel that I used to believe.

I think the Berean example can be used for any variety of issues that we are taught.

I still find it so ironic that it’s in these evangelical/fundamentalist churches that are so set on reading the Bible for themselves, priding themselves on not being Catholic, that still have these issues.

I remember how astonished I was in 2012 when I learned of the “gospel-that-was-not-a-gospel” that a friend grew up with in her Independent Baptist church, which sounded exactly like the works-based teachings of the Middle Ages Catholics.

Religious guilt comes in all different flavors. Catholic Guilt, Protestant Guilt, Jewish Guilt. Take your pick or….you can have a scoop of each.

Thank you Rebecca! this is so confirming of my journey of faith, especially in the last decade or so, as I’ve been asking God to show me how I’m being deceived… He started answering this prayer before I even intentionally prayed it, and He continues to answer that prayer in so many ways! painful process, but oh so profound! The deceptions brought to my attention have taken many twists and turns in consuming the dross, while the refining process, revealing more fully, more purely, His beautiful and timeless truths, makes so much more sense with Who He is and His universal principles!

Open and enlighten the eyes of our hearts Lord, to know You more!

That is a prayer I’ve been praying for quite a few years too, Bev. I love the beautiful way He’s been revealing Himself to you, and I heartily second your prayer!