What Did Jesus Mean When He Said “Turn the Other Cheek”?

Last week I took a writing retreat to work on my third Untwisting Scriptures book,  tentatively subtitled “Your Words, Your Emotions.” It will address  good stuff like gossip and slander, and anger and fear and shame. My hope is for it to be out before the end of 2021!

One of the apparently audacious assertions I make about rights—besides the assertion that it’s basically impossible for us to give up our rights—is that Jesus never gave up His rights.

Since it’s standard in most of Christendom to believe that He did, and also since I know and believe the whole story of Jesus’ law-fulfilling life and sacrificial death and victorious resurrection and triumphal ascension and seating, I’d better have a good argument that makes sense.

I believe I do.

But right now, right here in this blog post, I want to take just one small piece of one chapter of that book. It’s the part about “turning the other cheek.” This is one of many Scriptures that have been used to keep the oppressed in a place of oppression.

This is from the first volume of Untwisting Scriptures that were used to tie you up, gag you, and tangle your mind, the one about “Rights, Bitterness, and Taking Up Offenses.”

In Matthew 5:39, Jesus taught, “But I say to you, Do not resist the one who is evil. But if anyone slaps you on the right cheek, turn to him the other also.” Some have taught that Jesus here is teaching the giving up of rights.

But Jesus Himself was slapped on His cheek, and the whole scene is played out for us in the gospels. This is the account in John 18:22-23. 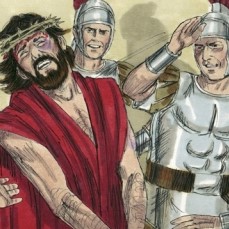 When he had said these things, one of the officers standing by struck Jesus with his hand, saying, “Is that how you answer the high priest?” Jesus answered him, “If what I said is wrong, bear witness about the wrong; but if what I said is right, why do you strike me?”

Jesus defended Himself—as being right. If we take the “turning the other cheek” exhortation at face value, it seems that He didn’t obey His own orders.

But the “slapping on the cheek” Jesus referred to in Matthew 5:39 wasn’t a violent punch intended to inflict pain. It was a slap intended to show contempt—in those days, it was a common way of humiliating a person. In the time of the New Testament,

“To strike a person on the right cheek implied giving someone the back of the hand from a right-handed person. It is not so much the hurt as the insult that is here in mind, because it was a symbolic way of insulting a person’s honor.”[1]

Turning the other cheek would actually show self-respect, as if to silently say, “I will not respond in kind. I will show this man I am a person of dignity, every bit his equal.” When Jesus spoke to the officer who struck Him across the face, He spoke in a similar way. Essentially He was saying, “If I deserved this slap, then show Me how I did. If I didn’t deserve it, then you were not right to give it to Me.”

In the book, I was focusing on the subject of rights, so that was where this discussion ended. But here, I want to take it a little farther.

Jesus said, “Do not resist one who is evil.” What does that mean?

When an evil person slaps you to degrade you (physically or through words), you can be reminded of your dignity and respond accordingly. Jesus Himself is our example.

But does that mean we should never “resist” anything? No. Consider these Scriptures:

— In Ephesians 6:13 the Lord tells us to take the whole armor of God so that we can withstand (same word) and stand firm in the evil day.

— In James 4:7, the Lord tells us to submit to God and resist the devil (same word) so that he will flee.

— In 1 Peter 5:9 we read the same admonition again: to resist the devil, firm in the faith.

Our battle is ultimately not with flesh and blood, but with principalities and powers.

We can work for justice on this earth. That is a good thing.

We can expose the dark works of those who have given themselves over to the evil one. That is a good thing.

We can urge those who claim the Name of Jesus to recognize the evil and help those who have been affected by it. That too is a good thing.

But our ultimate “resisting” must be against the evil forces of the spirit realm.

That is done through spiritual warfare prayer, in the power of the Holy Spirit.

Eventually Jesus gave up His life, for our salvation. That was His mission from the beginning.

But we are not called to give up our lives for the salvation of others. Though He calls us to refrain from resisting evil in this physical realm, and He tells us there will be suffering and even death, still there are many examples in Scripture and from godly Christians in history that show us that it is right to protect our lives and escape if we can. (If you want to read to your children about a Jesus follower escaping again and again from his torturers, one of the children’s biographies I wrote might help.)

There is so much more to the Christian life, and even to “turning the other cheek,” than simply giving up and “taking it.” We can stand strong, in faith, in the power of the Lord Jesus Christ.

i have trouble with these verses such as “turn the other cheek.” I have a friend who was feeling sad that her husband was not considering her needs. He would not take initiative to take her on dates and expected her to work at a job she did not like, for example. She was struggling with resentment. Ultimately, she settled on the verses in the Sermon on the Mount about going the extra mile and giving an extra tunic, to mean that she should continue to pour her life out and serve rather than pursue the dreams that she had for herself (not her current job) or ask that her needs be met. I have seen this with other women. They are not being abused, but it feels like the husbands are somewhat selfish and wives think they are supposed to keep laying down their needs and desires, in order be good wives. It doesn’t seem exactly healthy to me, but there is no abuse, like I said.

I believe it’s important, before the Lord, to consider what our true *needs* really are. And to lay out our *desires* before Him and ask Him to help us get our desires in alignment with His desires. Even if we’re living with a spouse who isn’t as mature as we would like, we can still grow in wisdom, maturity, and integrity. We can still reach out a hand of love to others. I believe your friend made a wise decision.

What you have described could be considered abuse, and she would be wise to get some godly advice and maybe set some boundaries. A wife who forces her husband to stay in a job he hates because of her materialistic desires would be abusive as well, and his advisors would probably not suggest he just put up with that.

I agree, that is abuse, or definitely going in that direction. And that is not a marriage. If she had a good church with healthy elders (not likely) she would appeal to the elders for help for her husband. That kind of behavior should not be tolerated from a professing Christian married man. This is how we end up with so much domestic abuse in Christian marriages. We need to start being a little more intolerant of marriages that do not fulfill Ephesians 5, sooner in the process than too late. So I do not agree that she did the right thing, but I’m not sure what exactly she should do if someone doesn’t hold him accountable. At very minimum she needs to keep her eyes open because this kind of behavior could be early signs of abuse that could get worse in time.

Also, one more thing I thought about. I think this section is in reference to persecution from unbelievers, not marriage, and I don’t even think between fellow Christians. But correct me if I’m wrong. No spouse should ever be in a situation where he or she would have to “resist an evil” spouse or to “turn the other cheek “ because a spouse should never act like an enemy of Christ. If that’s the nature of the relationship something is WRONG.

If his opinion on her job selection is more like he has final say, then that is abusive. If she wants advice about direct communication in marriage, the Christian site ToLoveHonorAndVacuum.com has an article this week.

Thank you for this excellent reminder that we should seek in the Word what Jesus actually did to understand what He said. Jesus also chose when to speak back to Pilate. In the Gospels, we do not read of Jesus rebuking the Roman government rulers, but we do read of Him sternly rebuking the religious leaders of the time.
Much to ponder, pray over, and seek what God’s Spirit is saying to us today in our own lives. Let us hear His voice and heed and follow Him.

My brother, who regularly preached to others at school in the 70’s, faced down a kid in high school who wanted to see if he would turn the other cheek literally. My brother did several times and let the kid hit him. When he showed no sign of stopping, my brother grabbed his arm and firmly said “That’s enough!” And walked away. (It didn’t hurt that my brother is a very big guy.)

That’s a great testimony. He did the right thing in stopping that kid. Jesus wasn’t trying to teach that we should allow ourselves to be bullied or abused or walked all over.

What an important contrast i.e.: “There is so much more to the Christian life and even to turning the other cheek then simply giving up and ‘taking it’. We can stand strong, in faith, in the power of the Lord Jesus Christ.” To me the latter grants one’s own person or self-including one’s volition- as availed and/or affirmed, this rather then as negated or annihilated. In my opinion this matter can be critically important, perhaps especially, for severely abused persons.

Yes, so much. This is the heart from which I speak.

Hi Rebecca, I think I’ve sent you this link on an earlier occasion, but it is relevant to the topic of your post so I’m sending it again. It’s up to you whether you want to point your readers to it.

I was viciously and verbally attacked by a pastor. I sat and took it and finally walked out. Second time, same thing. I tried reconciliation, but a third time came. I left the church. I have told no one what happened as I did not want to be the cause for his demise. It has been a painful two years of betrayal. I have always stood up for myself, but this time I felt I was to stay silent and let God deal with it.

I’m so very sorry for what happened to you. Sometimes it’s right to speak, and sometimes it’s better to stay silent. Each individual must work that out with the Lord.