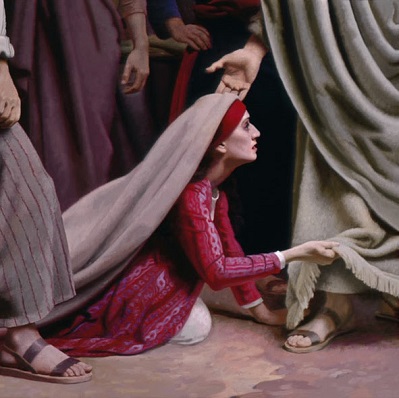 Helena Knowlton writes at Confusion to Clarity, and within that website she offers a course and community called Arise. When this course opened last month I signed up, especially because Helena focuses on how trauma affects the body, and I continue to want to learn more about that.

I highly recommend Arise for Christian women survivors of abuse who would like to experience a guided healing journey for your heart, mind, spirit, and especially for your traumatized brain and body.

Besides the actual teaching course, Arise has so much more available. I’ve hardly scratched the surface.

When I listened to a certain lesson inside the course, I immediately asked Helena if I could make a guest blog post out of it, and she graciously agreed.

I want to talk about the story of the woman who touched the hem of Jesus’ garment.

She had been bleeding for 12 years. She was considered unclean and filthy and was a complete outcast. She had no value. She wasn’t allowed to touch anyone during, or for a week after, bleeding. Since the bleeding never stopped, that was all the time.

She must have lived with an overwhelming sense of shame all the time.

Even drawing water from the well must have been an ordeal – to find a time to go when no one was there. To walk through town and face the cruel stares and judgment of others. To be treated as if she had sinned and that was why she was afflicted with this condition. To be abandoned by her family and friends for a religious tradition that blamed her for something she had no control over.

She was childless, infertile, not allowed to go the synagogue, poverty stricken, and unclean. She may have married young, before this started, and no doubt her husband divorced her. She probably hated the religious people of the day. She could well have blamed and hated God for this. She was taken advantage of by professionals who never helped her and took all her money. And none of this was her fault.

This woman spent 12 years in a society that considered her an outcast. Don’t you think that warped her perception of herself? Don’t you think that caused intense cognitive dissonance within her? Blaming herself but hoping she wasn’t what everyone accused her of being. Do you think this woman came to a place of hating herself? Of hating her body for betraying her? Of wishing she were dead? Of waking up every day in hopelessness? Of feeling dread when she saw the blood again?

Do you think she prayed for years asking God to remove this from her? To heal her and let her have friends and a community and acceptance? To have a moment of peace from the self-hatred?

Then, one day she heard about Jesus and she broke every rule to seek him out. She risked everything by approaching him – defiling a holy man and everyone in the crowd just to reach him. What a beautiful act of desperation! There was still something inside her that felt worthy enough to be healed and accepted again.

Can you imagine how frightening it was when He asked, “Who touched Me?” I’m sure she was expecting condemnation and scolding. Then He looked her in the eyes with a look that said He understood, that He had walked the entire journey with her and felt her pain, the loneliness, the sorrow, the suffering, the self-hatred.

He turned to her and called her, “Daughter.” She is the only person in the gospels that Jesus ever called daughter.

I think her broken-hearted Father was reassuring her that He had never turned his back on her the way that everyone in her life had said He had. He was telling her that He loved her and had never rejected her. That He saw who she was under the burden of shame. That He wanted to heal all her self-rejection and self-hatred.

Jesus accepted her and made her clean again. He removed the stigma and restored her back to herself and others. She was never unclean in His eyes—she had hated herself because of religious lies and a culture that scorned women. He hadn’t ever put that burden of judgement on her. She had done nothing wrong. Jesus shows us how God thinks of us as women. He never sees us as second-class citizens.

Isn’t this our story too? Being estranged from our selves. Blaming ourselves for things that are not our fault. Taking on the lies of the abuser, the church, and our culture. Believing that, because others chose not to love us, we are unlovable. Being judged and condemned by the church and treated as outcasts if we speak about our abuse and get a divorce. Treated as if what we went through was of our own making. It wasn’t.

Some of us also treated some part of ourselves as an outcast – the hurting part, the confused part, the traumatized part. The part that carries the shame.

When we feel shame, we lose touch with all the glory of who we are as God’s beautiful daughter. Thankfully, Jesus transformed this. He has never despised US. He stared shame in the face and hated and despised it. We can stand at the foot of the cross and see that Jesus bore all shame. He refused to let it define Him, diminish Him, or keep Him from completing His purpose. He overcame shame and now sits in glory.

There are so many beautiful scriptures about not being ashamed, and no wonder, since shame is from the enemy. God knows how much it cuts us to the core and separates us from Him and from living in His love, and he hates it.

Psalm 34:4-5: I sought the Lord, and he answered me and delivered me from all my fears. Those who look to him are radiant, and their faces shall never be ashamed.

Hebrews 2:11: Both the one who makes people holy and those who are made holy are of the same family. So Jesus is not ashamed to call them brothers and sisters.

Romans 5:5: And hope does not put us to shame, because God’s love has been poured out into our hearts through the Holy Spirit, who has been given to us.

Romans 10:11: Anyone who believes in him will never be put to shame.

Zephaniah 3:19: At that time I will deal with all who oppressed you. I will rescue the lame; I will gather the exiles. I will give them praise and honor in every land where they have suffered shame.

While we’re doing all this work on guilt and shame, self-criticism, and self-rejection, I hope you’ll remember that our Father calls you daughter, precious, loveable, beautiful, worthy, valuable. We are the ones Jesus came for – the wounded, the weak, the oppressed, the vulnerable, the broken, the desperate, the poor in spirit.

He wants you healed because you are His wounded beloved.

Arise will open again for new members from Thursday, January 27 through Sunday, January 30. Go here to see all that Arise offers.  I believe you will be blessed.

I LOVE, LOVE, LOVE this! Thank you for posting it!

I’m so glad you loved it!

I always loved the story of the bleeding woman. I could always relate to her for that very reason, and it was one of the first gospel stories that really spoke to me. Deep feelings of shame, uncleanness and unworthiness. I always felt like the “Flow of blood” was her self-hatred. Even though the story talks of a physical illness, menstrual blood was an impurity, along with leprosy, death, and other things. So it’s like a physical symbol of something spiritual.

Yes, and I thought Helena presented that so beautifully.

We don’t always know the full story behind the women in the Gospels, but we can gather that they were all survivors of some kind of trauma, rejection from the community. The Bleeding Woman, The Samaritan Woman, the woman in John 8 and Luke 7.

Seems like a reasonable supposition that some of them were, at least. Understanding trauma lends so much more depth to so many of the Bible stories, for sure.

It’s a beautiful story, isn’t it. What a loving Jesus we have

“He turned to her and called her, “Daughter.” She is the only person in the gospels that Jesus ever called daughter.
I think her broken-hearted Father was reassuring her that He had never turned his back on her the way that everyone in her life had said He had. He was telling her that He loved her and had never rejected her. That He saw who she was under the burden of shame. That He wanted to heal all her self-rejection and self-hatred.”

OH MY HEART!!!!
hallelujuah!!!
thank you for sharing this powerful post.
blessings all!

We NEED to know how Our Loving Father sees us! May you rest in His safe arms!

Great article. A messianic Jew once told me the the fringe on the bottom of the garment, the area she touched, was only allowed to be touched by a family member of the man. It was an intimate place, so the only way the woman would not have been stoned was that Jesus acknowledge her as daughter, which He did.

Wow, that gives an extra depth of meaning. Thank you.