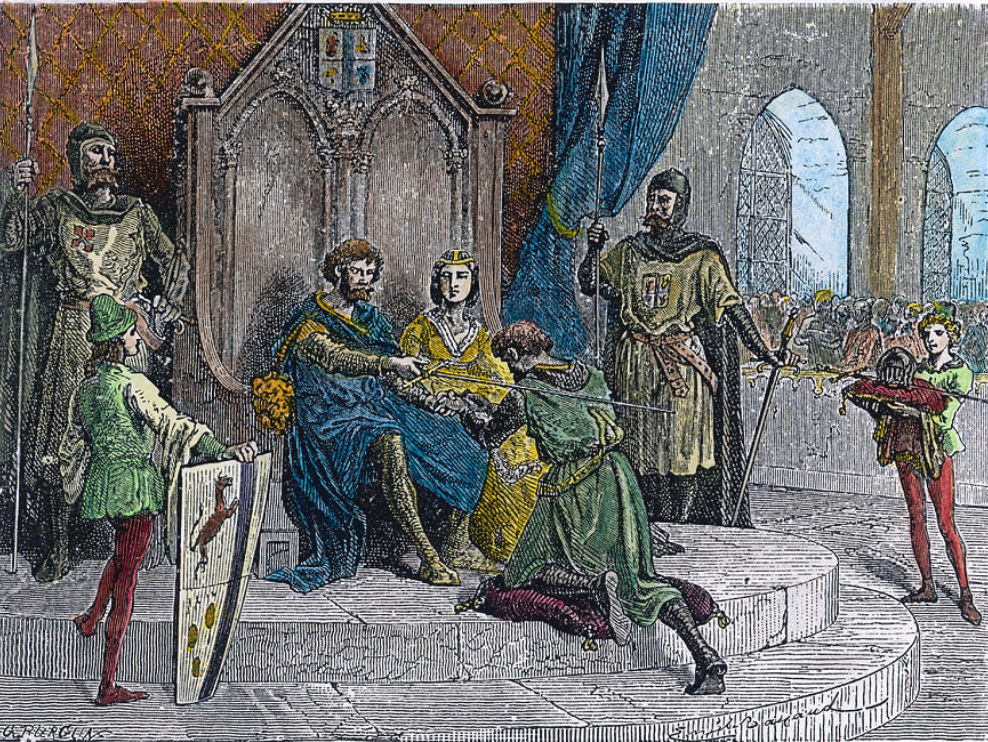 When I was a young graduate assistant working at Bob Jones University (learning publishing at BJU Press), like all the other employees I was given certain odious assignments to fulfill each semester, such as monitoring the “dating parlor” for a couple of hours on a Sunday.

One Sunday after I had finished that odious assignment, my replacement came along, a BJU lifer, Miss Potts. She asked me if I was going to obediently head on over to Vespers (the University’s drama program presented on Sunday afternoons).

“No,” I responded somewhat defiantly. “I’m going to church.”

Miss Potts was an old Southern lady with an absolutely perfect Southern drawl.

“The Univuhsity,” she said, “would want you to go to Vespuhs.”

And there a loyal generation and a . . . different . . . generation went head to head with the loyalty issue.

What does the entity-without-a-face, “the Univuhsity,” want me to do?

“Well,” I said, hoisting my bookbag to my shoulder, “I think the Lord would want me to go to church.”

And I left before she could respond again.

Now my point here isn’t whether or not going to church was the absolute best thing I could have done with my time at that moment. (As far as I know now, it still was.)

It’s a question of loyalty.

What in the world is it, why is it so touted in Christian circles, and why am I saying it’s not Christian?

It came up in a phone conversation with someone recently when she was accused by others of “disloyalty.” I said, “Yes, I wrote a blog post about that many years ago on BJUGrace.”

It came up in my mind again last night as I read Deborah Brunt’s gentle-yet-brutal exposé of the Southern Baptist Convention on her blog, Key Truths.

Have you ever, when reading the negative things someone says about an institution to which they devoted many years of their lives—say, me, when I learned and grew so much at BJUPress and have such great appreciation for those who taught me there—have you ever wondered why they would be so disloyal as to call out problems or perceived problems in that very institution?

Like, say, the way I and some friends did for several years on BJUGrace? The way Rachael Denhollander has done with Sovereign Grace Ministries? The way Deborah Brunt has done about the SBC?

The fact is that the concept of loyalty fits more with the feudal system than with Christianity.

It was first used of knights swearing allegiance to kings, to fight for that king and no other king. It indicated an underling and an overlord, as well as a strong sense of “My king, right or wrong.” Because loyalty is unswerving.

This concept of loyalty isn’t in the Bible. It just isn’t. No place.

You might see another concept in the Bible that you think is loyalty, but nope.

What God’s Word teaches is faithfulness: always in love seeking the other’s good. (People often use the word loyal to describe what husband and wife should be to each other, but faithful is a far better word.)

This examination of terminology sheds a whole new light on the issue.

Loyalty implies sticking with the organization without asking questions.

Loyalty will go to bat for the institution without understanding the issues.

Faithfulness will do the hard thing to actually look at what’s going on, even if the answer gives a gut punch.

Loyalty says, “I will simply assume that this organization is faithful to God.”

Faithfulness says, “I’ll drag these issues [sometimes issues no one else is talking about yet but which are in the warp and woof of the organization] out into the light and examine them in the light of God’s Word.”

Go for faithfulness rather than loyalty

True faithfulness knows that when those who work in an institution are promoting to the public a presence of peace and joy but behind the scenes are living in fear of the senior pastor, there is a huge problem that needs to be addressed.

Even though you, a lover of Jesus Christ, you would never say, “My church/university/denomination/mission board, right or wrong,”

even though you would never say that . . .

if you stand by the concept of institutional loyalty, this may well be how your loyalty ultimately plays out in your life.

You may end up putting someone or something else in place of God in your life. And isn’t this one of the things you’ve warned others against?

Where will you stand?

Will you be faithful to God and His Word as we look at the possibility that an organization may be systemically corrupt (because the leaders and possibly even the founders are/were corrupt)? Will that shake you to the core too deeply? How big is your God?

Will you look the other way because you’ve committed yourself never to speak evil of your leaders, the way the loyal knight never questioned his regent?

Will you refuse to listen to or speak about any of the wrongs you see or hear about lest you be gossiping?

In the name of “serving the church,” will you offer blind loyalty to leaders who need to be questioned?

In the name of “erring on the side of grace,” will you refuse to listen to evidence against a hero of yours?

Will you turn away from this talk, labeling it “negative”?

Will you determine that you will never say anything that could harm a leader’s reputation?

There are so, so many reasons to be loyal.

All of them carefully crafted, carefully put in place, by those who want to retain your loyalty. Unquestioning.

Because if you question, of course, it’s not really loyalty, now, is it?

True faithfulness implies mutuality among the followers of God.

As Hebrews 3:13 says, we “Exhort one another daily, while it is called today, lest any be hardened through the deceitfulness of sin.”

It was faithfulness that the prophet Nathan showed to King David when he confronted him, rather than “loyally” keeping his mouth shut about David’s sin.

If one person is doing wrong as clearly delineated in the Bible (rather than as determined by extra-Biblical standards), another who loves God and loves others would be faithful to come alongside and say, “You’re on the wrong path. Here’s the right path. Turn and go that way. Turn now.”

This isn’t “loyalty.” But this is faithfulness. A faithfulness that embodies mutuality, maturity, responsibility, and integrity, virtues in which all of us should be growing.

Will you be faithful to follow Jesus Christ, even if it means losing nearly everything? This is what happened to Deborah Brunt in the Southern Baptist Convention. It has happened to many others I know too.

They are faithful to Jesus Christ, following Him still, even when they have lost nearly everything because of the entity-with-many-faces institutions that they thought were following Him as well.

Though there are some institutions that at this point I believe need to be dissolved because they are completely and thoroughly corrupt at the very highest and deepest levels, I, along with many others, do still hope for better things ahead.

And we ask God for the grace and grit to faithfully continue on. With loyalty to none. And faithfulness to all.

It affected me deeply, friend.

After reading this, I envision a long list of people, both lay and leaders, that I think should read it. But then I realize, this is for me. Breaking the chains that certain (non biblical) doctrine has held on to me for so long…this is for me. Thank you for sharing.

Thank you so much, Julie.

This is beautifully and powerfully said. Thank you.

This kind of truth is so desperately needed. Yes, blind loyalty defines a cult, while faithfulness is supported by evidence and mutuality.

Wow! Oh my soul, while I love to look up the definitions of words and their true meanings, I never really thought about loyalty vs. faithfulness. HUGE difference and loyalty isn’t a Christian virtue because it DOES mean that you keep your mouth shut and not ask questions OR keep anyone accountable, which we should! Thank you for this wonderful, timely post. In a world where “institutions” don’t even know which end is up any longer, we need to go back to God’s Word, the truth, as to what and how we should live our lives for the truth of Jesus Christ. Loyalty isn’t about Jesus, it’s about religion. Faithful is being full of faith to the One Whom died for you and me. Thanks again!

When we stood against an abrupt and unnecessary removal of funds/ support to a family for all the wrong reasons, we were accused of being too loyal. Having the audacity to question a poor decision that left a family broken meant we were “too loyal,”. Ironically, we were part of a group that was asked to have their back and care for them like a lifeline of encouragement. In the end, they had to make it right, but I was then accused by a wonan leader of being responsible for her husband missing his son’s sport event because he chose those dates to leave to repair the damage.
Later leaders within the same group were so loyal too each other that they brought havoc on many in heart wrenching circumstances. They left others questioning their beliefs because “God’s chosen leaders” became more loyal to each other than faithful to God. When you hear, “I believe this leader 100%” you may soon see evidence that such loyalty to leaders is more valuable than truth.

Yes, and I’m so sorry this happened to you.

Bless your heart Rebecca… very confirming and insightful… I’ve been encouraging people to focus on “one another” and the priesthood of all believers, instead of institutional hierarchy and power that we call leadership…

Here’s a partial list of the 100 “one another”s in the NT…
https://www.mmlearn.org/hubfs/docs/OneAnotherPassages.pdf

I found your blog after your interview with Brett Harris at the Young Writer’s Workshop and I’m glad I read this post. I’ve always considered myself a loyal person, even used the word to describe myself, but this gives me a new perspective. I’m so thankful for all I’m learning.

Thank you for coming by, Emily! It’s good to meet you. 🙂

Thank you, Rebecca, for saying this things. The unquestioning loyalty demanded in church world has covered so much sin and caused so much damage. It looks nothing like the faithfulness described in the Bible.

That’s awesome, Rebecca!! I’m mindful of ‘family loyalty’ that insists unswerving allegiance to spouses and other family members too, even among Christians, whose first allegiance is to their God, following Jesus’ teaching and choosing his character.

. Wow. Thank you. That certainly clarifies the issue.

Thank you so much for this. Encourages me as I’ve faced this a LOT in my ministry.

I’m so sorry, and I’m thankful it was encouraging.