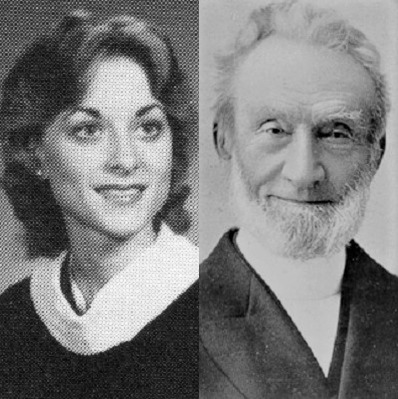 Many thanks to those of you who met my birthday deadline for giving feedback on the first half of my new book Untwisting Scriptures that were used to tie you up, gag you, and tangle your mind: Book 3 Your Words, Your Emotions.

My blog subscribers are the ones who get offers to read early versions of my books. If you’d like to be included in these offers in the future, subscribe via the blue bar above.

“You have to get up and eat something. You can’t go on like this.”

That was my mother. I was 23 and trying to accomplish a several-day-long spiritual fast, so I could discern the Lord’s will about my future, specifically graduate school. But instead, I had made myself completely sick with a never-ending pounding headache, and I couldn’t even think enough to ask God about anything at all.

So I got up, had some graham crackers and milk, and felt like a complete failure. I wanted so much to have faith like George Mueller.

Somehow, even though my fasting had been a failure, I eventually came to the conclusion that going to grad school would be the best plan.

So, 40 years ago today, on my 24th birthday, September 5th, 1981, I drove from Tuscaloosa, Alabama, to Bob Jones University in South Carolina.

As I turned the key in my Volvo early that morning and waved good-bye to my parents and sisters, the song that randomly played on the radio was “Going to Carolina in My Mind.” I didn’t think of it as a sign from God, really, but I thought it was pretty cool.

I wanted so much to see God as real in my very own life. I wanted to follow God in faith the way George Mueller did. It may sound foolish today, but I went there without enough money to pay for more than a month of schooling, determining to seek Him to provide. In true George Mueller fashion, I told no one, not even in the prayer group prayer request time. Only the Lord. I didn’t fast about it again, but I talked to the Lord about it a lot. And tried hard not to worry.

I didn’t know they needed writers for the textbooks they were writing at Bob Jones University Press. I didn’t even know what Bob Jones University Press was. But with my school application I had included a resume that mentioned a little bit of writing I had done for an educational publisher (because a friend had gone to work for them, and she had sent some freelance work my way).

But that was what eventually led to my being hired there as a graduate assistant, with all my tuition, fees, and room and board, all covered.

There was more, too. As my BJU Press supervisor Jan Joss told me, working there gave me the equivalent of a master’s degree in publishing. And my first solo book was published, With Daring Faith: A Biography of Amy Carmichael, the first of 19 books and counting. (I also gained a husband out of the deal–we met there at BJU Press.)

Perhaps largely because I came in as a grad assistant and not as an undergrad student, my good experiences at BJU were many, and my bad experiences were few. (One of those memorable bad experiences would be when the men who were writing the Bible curriculum laughed at me because I, as a lowly elementary author, was sent to them to ask them to check what I had written for accuracy, and they made it clear that was beneath them.)

I knew there were some silly rules at BJU (no walking on the grass, women have to wear stockings, etc). But there were also good people, and the school provided a solid education in certain areas.

However, 30 years later, when abuse victims and survivors began speaking to me about their experiences there, I didn’t say, “Well, *I* didn’t have a bad experience there, so you must not be telling the truth.” I listened, and I believed them. Eventually I began speaking out, explaining among other things why “loyalty” is not a Christian virtue. I discovered in 2014 that many Christians didn’t think logically and many Christians didn’t know the Bible. And that is all part of the path that has led me to where I am now.

But today I’m pondering the 40-years-ago experience. George Mueller, though he may have had his blind spots, is still one of my heroes as an example of prayer, of seeing a desperate need (orphans on the streets of English cities), wanting to provide for that need, and wanting to see God glorified through that provision.

My boss at the Press, Jan Joss, patiently taught me so that I could become a better writer (marking up a children’s story with several different colored pencils to tell me all the ways that it failed to meet her expectations as a worthy story to be published–for which I’m eternally grateful).

And the Lord lovingly opened the way. I had no idea what the path would be when He set me on it in those days, but I wanted very much to walk it with Him. I’m thankful He knew, and I’m thankful He leads and guides with love. In spite of the evil that I truly had no comprehension of in those days, I’m so grateful to say that I still see Him work in mighty ways.

And I still worship.

Happy Birthday, Rebecca!
That’s beautiful – lovely timing for me, as I pray on behalf of my daughter at this time.

Happy Happy Birthday Dear Friend! You are a gift of God to me TODAY and everyday as you allow Jesus to pour His blessing through your life into mine and so many others

Thank you so much, friend. I value your friendship.

I actually read that George Mueller did send out a regular newsletter to his ministry friends / supporters, so it’s not like all the prayer answers were totally ‘out of the blind’. Nothing wrong with letting your ministry partners what the needs are, that’s what Apostle Paul did too 🙂

Happy Birthday, Rebecca!
Thank you for sharing this particular time of your life as it resonates with what I am presently experiencing.
God bless you and your loved ones as you continue steadfast and glorifying an awesome God! <3

Wonderful post…
“Eventually I began speaking out, explaining among other things why “loyalty” was not a Christian virtue” WOW! This is what kept me from talking to anyone at my church about my ex-husband’s abuses. There, the pastor taught that it was “disloyal” and “ungodly” to tell of private “family business.” I tried talking to that former pastor once about how distraught I was regarding some poor decisions and contrary to the word of God behaviors ex was exhibiting but was told that as a wife, I was called to “follow” my husband’s leadership. Thankfully, I have now learned that my loyalty belongs with Jesus, and with what is RIGHT in His eyes.

So thankful to hear that, Deb. That blog post on loyalty eventually went into my second “Untwisting Scriptures” book, about Patriarchy and Authority (https://amzn.to/2Vic0n8). I also talked about it in my interview with Julie Roys, which you can listen to here: https://julieroys.com/podcast/what-does-the-bible-really-say-about-patriarchy/

As I read your amazing testimony here, Rebecca, I found myself saying “Wow” between sentences. I love how you clearly see the gracious hand of God working in and through you and others along the way. Such a sweet testimony to His goodness and your tender heart.

God has blessed the work of your hands and your faithfulness and blessed the lives of so many others in the process – mine included.

I know God will continue to use your gifts and talents for others’ encouragement and His glory.

Enjoy your special day! You deserve to be celebrated.

Thank you so much, Cindy. As I prepared a quotation from you for my upcoming book, I thanked the Lord for you as well.

A window into your heart. I am so thankful for you, my friend. Hope your day was wonderful!