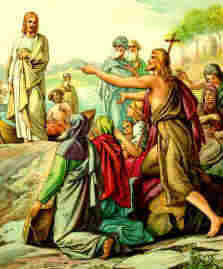 John the Baptist made this famous statement not just as a word of resignation to the inevitable.

He uttered it not as a purposeful display of humility.

Rather, he proclaimed these words as a joyful declaration.

In fact, in the verse just before that one he explained himself: “I am the friend of the Bridegroom. My job is to prepare the bride for His coming. Then, when I hear the Bridegroom’s voice calling for the bride that I have brought, I rejoice at that sound, because He is the one who is supposed to claim the bride. This is how my joy is made full: by His ascending and my receding.”

John had been crying, “Repent, for the kingdom of God is at hand!” But now he had turned his own ear to another voice, a voice that made him catch his breath and strain to listen.

What was the sound of the voice John heard? That new voice cried, “Repent, for the kingdom of God is at hand!”

Why, those were the same words John himself had been crying for months. He could have thought with indignation, “Why is He preaching the same thing? Why are they turning to Him instead of following me?”

But no, the sound of Jesus Christ crying out those unoriginal words was like heaven’s music to John. His heart leaped up with joy at the sound of those words. He has come!

John saw that some faces were still turned to himself. “Behold, the Lamb of God!” he cried. Look at Him! The sight of Jesus gave a joy that took his breath away.

John knew that he had a certain mission (which had been given to him from heaven, vs 27) as a harbinger, an introducer, a preceder. It was this sense of purpose—to point others to Christ—that gives his famous statement the context it needs, a context of appropriate humility and a joyous acknowledgement of a glorious reality. The reality that the One he pointed to was worthy, worthy, worthy of all glory and honor and praise.

Contrast this with the reaction of the Pharisees.

“What will we do?” they said, “For this man does many miracles. If we leave him alone like this, all men will believe on him, and the Romans will take away our position and our nation.”

Compare this to me about ten or fifteen years ago, when I challenged my friend about her assumed salvation (because she had written a date in the back of her Bible when she prayed a prayer, and she referred to that for her assurance). The Lord used me to point her to Jesus Christ alone, and she was eventually truly saved, as was her husband. Then they were baptized together. We went to the baptism, and I, expecting to hear myself referred to in her testimony, was prepared to act appropriately humble. When she gave her testimony and pointed only to the Lord, I almost indignantly thought to myself, “She didn’t say anything about ME.” My own imagined importance had rivaled in my mind the priority, the ascendancy of my Lord.

Later I understood that receiving that glory before men would have been my reward, my only reward. (Even though none of the people in her church knew who I was, I would have felt that secret satisfaction.) If I want “my Father, who sees in secret,” to reward me with His far greater, more lasting and satisfying reward of Himself, my giving to Him would be with ears and eyes listening, looking for His glory alone.

I long to be like John the Baptist. “Look, look to Jesus only! Are you looking at me? No! See Him! Do you see how glorious He is? Look again! Can you hear His beautiful voice? Doesn’t it fill you with joy? Rejoice with joy beyond expression! Jesus is here! I am nothing! He is everything!”

This is not a statement of requisite, purposeful, dutiful humility. It is an outpouring of ecstatic emotion, a heart leaping up at the sound and sight of One who takes the breath away.