A Brief Timeline of Redemptive History

In our homeschool Bible teaching with Joshua, we’re emphasizing three levels of learning the Bible: 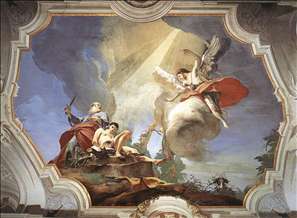 Level Two: Learn life lessons from the stories. Trust God. Show initiative. Be kind. These very basic truths are where most Sunday school programs and character curricula stop. But we can’t stop there.

Level Three: See Jesus. See him in the outworking of all the Bible stories—the sacrifice of Isaac, the wandering in the wilderness, the building of the temple—and then in the outworking of all the history since the Bible stories. See redemption, see the ongoing work of God. This overarching, God-oriented perspective is what not only takes us to higher “learning” but even transforms our lives.

In order to help with Level One understanding, the foundation for Levels Two and Three, I’ve had my children memorize nine points of history, at 500-year increments. They can learn it in about ten minutes, and then we can put everything else we learn in context of those nine points. These are rounded dates, but when it comes right down to it, is it more important to try to memorize the exact date that the historians say Rome “fell,” for example, or to have the big picture of history?

500 B.C. Rebuilding of the temple (by the remnant returned from captivity)

500 A.D. Fall of Rome (often called the beginning of the Middle Ages)

This is the schema–the slots into which all other dates fit. I can ask questions like, when did Rome become a world power? (It had to be after the rebuilding of the temple because that was Babylon, and it had to be before Jesus because Romans are all through the New Testament. So it was between 500 B.C. and the coming of Christ.) When did Solomon live in relation to Abraham? (He was David’s son, so about a thousand years later.)

Keeping the timeline in our minds–without memorizing a lot of specific dates–has helped my children a lot in not only seeing the big picture but in keeping our own time period in perspective. In studying the timeline running along our wall in the hallway, Joshua recently observed that the Modern Age isn’t nearly as long as he would have thought.

We’re but a speck on the timeline. But our God is eternal, and His purpose is sure.

I’ve just been looking at different history curricula this year. The ones I’m most interested in teach by story on a world history timeline, meshing Bible stories with secular histories. I was amazed at the correlations! The battle of Jericho happening at the same time as the birth of Athens and Sparta. Ezekiel and Buddha as contemporaries?

It is truly a different perspective on history. Your timeline is much easier to remember. Very handy. Thanks, Rebecca.

A friend’s son asked, “Did Columbus know Martin Luther?” Maybe he needed a little work on geography, but he had the chronology down!