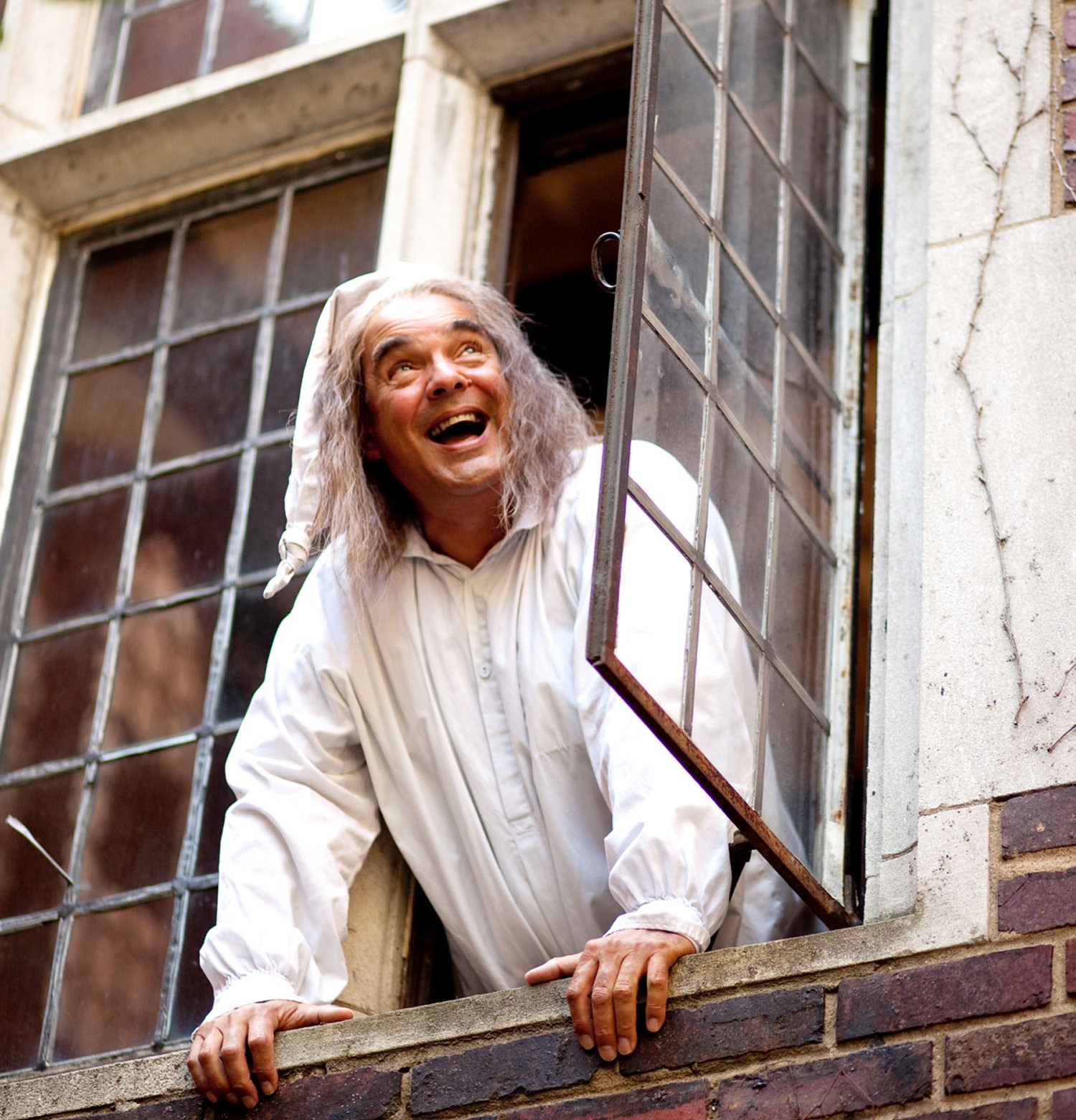 Moses Guiltersleeve was dead. There was no doubt about that.

How then did his deep, condemning voice still speak from the stone-carved doorknocker?

Eben bowed his head in shame. Of course Moses was right, Eben was as good as dead—that he knew full well. He had certainly been reminded often enough.

But Eben opened the door anyway. A cold draft of air slapped him in the face.

He settled onto his familiar wooden bench to eat his bowl of gruel.

Then came the clanging steel and pounding feet to stand and pronounce sentence before him. Moses was bound in chains, ashen as a Yule log after the New Year had long since come. 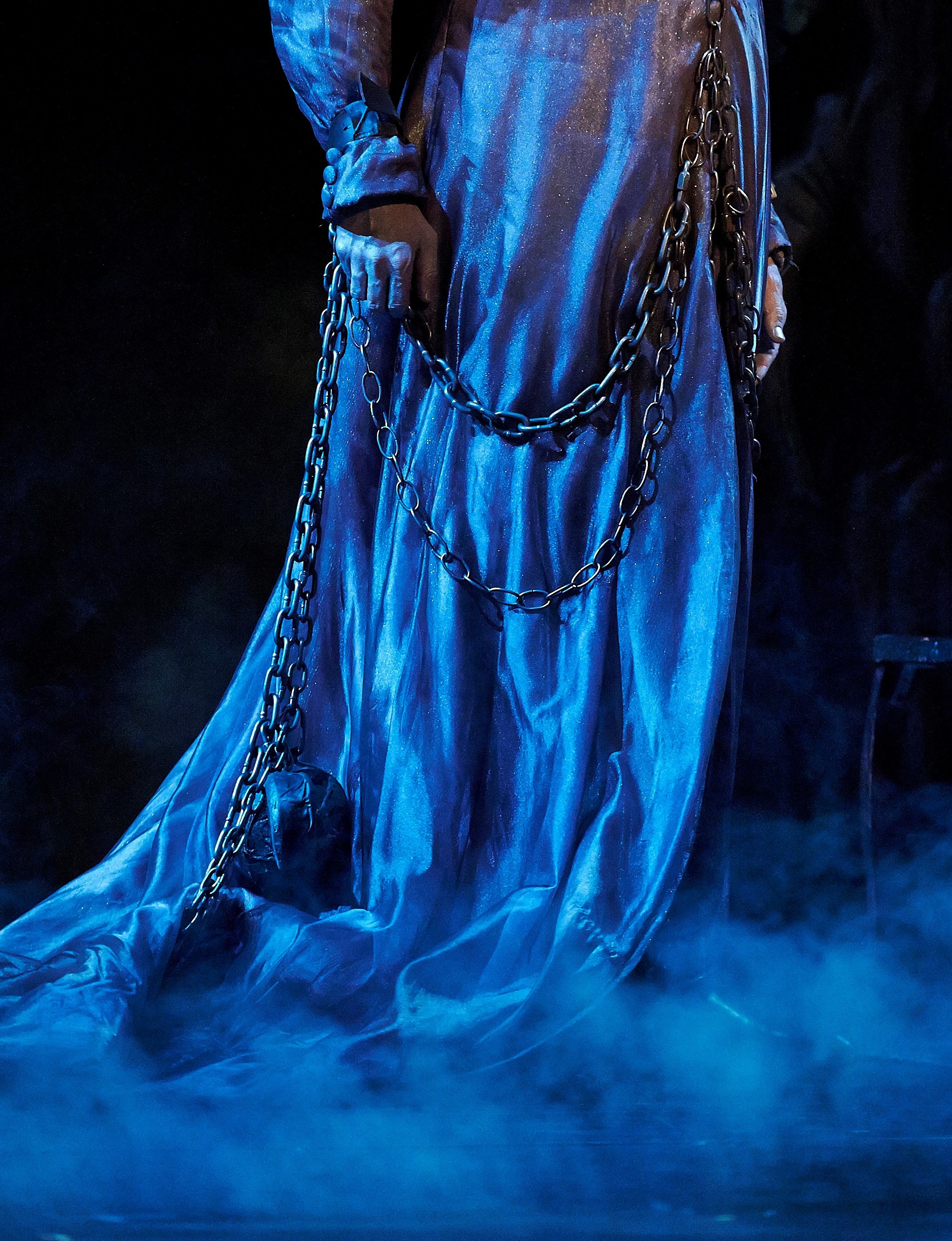 “Ebenezer! Ebenezer! I am your partner, Join me! We have an agreement!”

“Moses! Leave me alone!” cried Eben. “Leave me in peace!”

“Only when you go with me,” replied the specter—who now stood towering over Ebenezer Skewed.

“You know the agreement, Ebenezer.” Moses crossed his chained arms and stretched his leg irons to their limit between his scarred ankles. “You are a debtor to me, and I will have my payment.” With stern resolve he clenched the death contract, etched in stone. 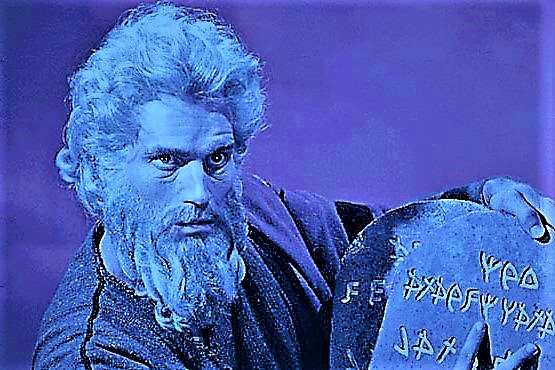 “But you know I cannot!” cried Eben. “The debt is more than I could ever pay!”

“Then our agreement still stands.”

“But it’s Christmas Eve!” squealed Eben, and he squirmed on the hard, unforgiving bench.

“Bah! Humbug!” boomed Moses. He laughed till his chains clanged so loudly that Eben covered his ears in terror. Sparks fell at his feet.

Moses heaved one more horrible gust of laughter, then squinted his eyes in consideration. An unfriendly smile overtook his face.

He added, “I’ll return tomorrow. Tonight consider your condition, Ebenezer. You will be visited by three spirits. Only the first is known to me, and he will make your indebted and hopeless condition known to you. You will feel it, Ebenezer. Believe me.”

Eben trembled. He dropped his head and closed his eyes as tight as he could, yet some small voice inside him dared hope enough to ask, “What of the other two?”

There was no answer.

So Eben went to bed, still shaking from the chill Moses Guiltersleeve had left behind.

He awoke with a start. Eben knew someone, or something, was in this place with him.

“Who, who are you?” Eben stuttered, trying to focus his blurry eyes in the dim light of a candle.

“I am the spirit of Past,” came the answer.

“What past?” asked Eben.

Eben heard the response just as he was making out the form of the speaker. This spirit was gaunt, yet youthful. Most likely afflicted with some unhealthy affliction since birth, furthered by neglect.

“Yes, you owe me that,” came the grim reply. “You’ll revisit sights you never wanted to see, even the first time your eyes beheld them. And you will remember the pain of them all again.”

Eben’s head sunk in shame as he crawled after his Past in the cold night air.

What Eben saw with that first spirit will not be retold on these pages, Reader, lest you compare your own shame to his. For all remember things they wish forgotten, some more than others. Suffice it to say that the gaunt youth called Past dragged Eben through the cold and darkness until that helpless debtor could hardly set one foot in front of the other. Eben had no desire to go on.

At last Eben fell, exhausted, enshackled, into a deep but troubled sleep, where no dreams came to him—only too familiar nightmares from the days of his youth.

The wind, howling through every crack in his window frame, awakened Eben again. At first he thought it a dreadful sound, until he remembered that wind often brings a change of weather—and that was a change he had secretly hoped for.

When Eben opened his eyes, a light shone in the darkness. And despite the utter blackness of the night (for his poor candle had long ago expired), the darkness retreated before this light. It could not overcome it.

As the light grew in its intensity, the wind grew stronger—even blasting open the windows and shaking the shutters like they were nothing more than a stack of legal papers!

“What is it?” shouted Eben, “Is someone there? The last spirit was bad enough! If you don’t even know Moses, why must you come? Have mercy!”

Now the light was so bright Eben covered his eyes. He held his bedsheets around him lest they be blown to the ends of the earth.

“Who are you?” demanded Eben.

“I am the Spirit Present. I am here with you.”

“Your debt is paid, Eben—the paperwork was swept away.”

“But it was stone—the agreement was etched in a rock.”

“The new agreement is now in a new stone,” said the voice.

The wind blew so hard it wrapped the sheets around Eben. He looked as if he were wearing a pure white robe.

Then the voice asked his name.

“And Eben means ‘stone.’ On that stone—in you—I have written a new agreement. You are free of your debt to Moses.”

At this news, Eben dropped his hands from his eyes. The white robe now fit him perfectly. And he remembered.

Eben scratched his head, “I knew this once,” he confessed. “And yet I was nearly shackled to Moses again, as if I were rightfully enslaved. What could have caused me to accept that debt again? What came over me?”

“Guilt,” came the answer. “Moses has no other offer to make.”

“Then I must reject it,” declared Eben. “It’s not in the new agreement, you say?”

At that, the Voice swirled around Eben until it lifted him in a warm whirlwind.

But he was at peace, and aware of a power greater than his own.

It was the Spirit, Present, with him.

He found himself resting. And his sleep at last was sweet.

Now Eben awoke a third time. There was no dread. He heard no wind, yet his lungs felt full with fresh clean air. His drowsiness was gone. The morning sun shone through the shutters.

Then he wondered, “What of the third spirit? Moses knew of only one, but he spoke of three. Have I miscounted?”

Eben flung open the shutters and looked out the window into the street below where he saw a lad out walking.

Eben called, “Ho there, young man! I was wondering, have you seen a man out this morning whose face looks like the face on my doorknocker?”

The puzzled boy looked up, “His face like a doorknocker, you say?”

“Not just any doorknocker,” Eben chuckled. “The one on my very own door. . . there.”

The lad looked at the door, cocked his head, and shrugged.

“Why yes, indeed, in fact he died on Christmas Day, many years ago.”

The boy scrunched his face a bit, then called, “You have a merry Christmas, sir.”

Eben felt his own spirit lifted with a surge of joy. “Thank you, my boy. And a merry Christmas to you as well, and a happy new year!”

Eben went downstairs and opened his front door. He studied his stone doorknocker—carved in the likeness of his ex-partner, Moses Guiltersleeve. He looked it right in the eye and said, “The Spirit did it all . . . all in one night.”

“Merry Christmas, Moses,” said Ebenezer. The stone face of Moses went cold, and Eben felt shame and guilt no more, only peace in his spirit.

The Spirit who is Present has come. Our own spirits can rest in the great work He has accomplished. Rejoice!

And blessed Christmas to you.

Tim Davis is the author of many stories and articles about the superiority of the New Covenant over the Old, both published and unpublished. He also has more Highlights Hidden Pictures published than any other illustrator in the world and  is the author of several books for children, including the popular Mice series, which you can see at this link here. He’s also my husband.